Why can't I embed a font due to licensing restrictions?

Before we answer this specific question, let's take a look at another question that was posted on Stack Overflow: Do I need a license for Windows fonts when using iText?

You should check the font license of each font you use. Let's take a look at two examples.

If you have arial.ttf in your C:\\Windows\Fonts\ directory, you probably didn't obtain the font from Monotype. It was probably shipped with your legal copy of Microsoft Windows, and Monotype may have licensed its fonts to Windows under a license that is less strict.

Let's right-click the arial.ttf file, and take a closer look at the properties to find out: 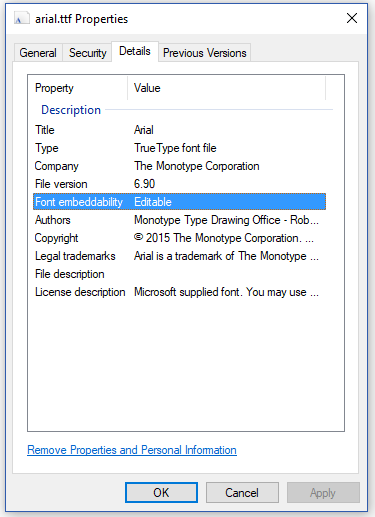 We're in luck: the Font embeddability is set to "Editable". This means that we can embed the font in a document, not only to print and (pre)view the document, but also to edit the document (e.g. edit form fields). The full license of this font program reads like this:

We can use this font as long as we use arial.ttf in the context of the Windows license that we bought. This implies that we aren't allowed to copy the arial.ttf to another computer, e.g. we are not allowed to copy this font to a Linux machine. If we need a font that can be distributed (e.g. iText distributed 12 fonts that can be embedded into a PDF file with pdfHTML), we should look for alternative fonts that have a more permissive license, such as OpenSans, OpenSerif, and OpenMono.

One of our iText users wanted to use the font Celtic Garamond the 2nd in a PDF in a non-commercial context, but whenever he tried to embed that font, the following exception was thrown:

The readme.txt file that accompanies the .TTF file sounds quite permissive:

This font is made by Levi and may be used free of charge for non-commercial projects. Please contact me if you plan to use it for other purposes. It also may be distributed free of charge on any websites provided this file is intact. 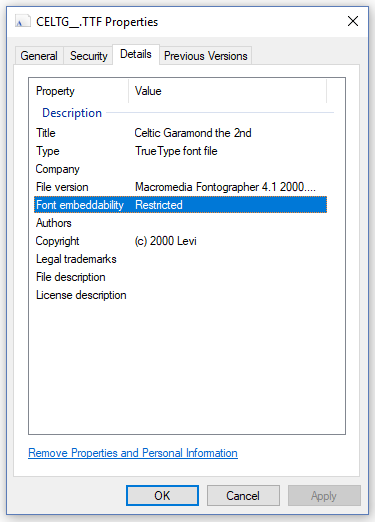 Properties of Celtic Garamond the 2nd

One would assume that, with the permissive license in place, there wouldn't be any legal problem using this font in a non-commercial context. From a technical point of view however, it's not allowed to embed this font in a document. The font properties clearly state that font embeddability is "Restricted": This explains the exception that is thrown by iText. You aren't allowed to embed the font.