Similar questions were posted on Stack Overflow, for instance on Aug 28, '14 by NMathur and on Jan 29, '13 by Shawson

If you live in the US, you probably use inches (in) to measure the size of a page, the size of a screen, and so on. If you live outside of the US, you are probably more familiar with the metric system, a decimal measuring system based on the meter (mm, cm). If you're working in an international context, you have to switch between both systems:

The length of a unit along both the x and y axes is set by the UserUnit entry in the page dictionary. If that entry is not present or supported, the default value of 1 â?„ 72 inch is used. (...) The default for the size of the unit in default user space (1 â?„ 72 inch) is approximately the same as a point, a unit widely used in the printing industry. It is not exactly the same, however; there is no universal definition of a point.

UserUnit: A positive number that shall give the size of default user space units, in multiples of 1 â?„ 72 inch. The range of supported values shall be implementation-dependent.

The default value of the UserUnit is 1, so unless we change the UserUnit deliberately, we don't have to worry about this feature. We can conclude that PDF uses the user unit as measurement unit. By default 1 user unit equals 1 point, which means that:

In the printing industry, the point is often used to express the size of a font. For instance: when I open Word on my PC, the default font is Calibri with a font size of 11pt. Although ISO 32000 claims that there is no universal definition of a point, it is safe to assume that 1 point is 1/72 of an inch, or:

In digital imaging, we often work with pixels. In the context of raster images, the size of a pixel depends on the resolution. We often use the terms dots per inch (DPI) and pixels per inch (PPI) interchangeably. There's a difference, but it would lead us too far to go into detail, but let's say that you render an image of 300 x 300 pixels at 300 DPI, then that image will measure 1 x 1 in. However, if you render the same image at 96 DPI (the historical value of Windows' display resolution), then that image will measure 3.125 x 3.125 in.

If you examine CSS files found in the wild, you will notice that many sizes are expressed in pixels. For instance: <img src="logo.img" style="width: 300px">. It's impossible to calculate this width in inches or millimeters without knowing the resolution, but there is a common understanding that 1 pixel is 1 / 96 of an inch in the context of HTML, hence:

Several other measurement units can be used in CSS (see the W3C on CSS units).

A pica (pc) is a hair less than 1/6 inch, and contains 12 points. Picas are typically used to represent fixed horizontal measurements, most often column width.

All of these measurement styles are supported by pdfHTML.

In this HTML page, we add a solid black border to every  <div> 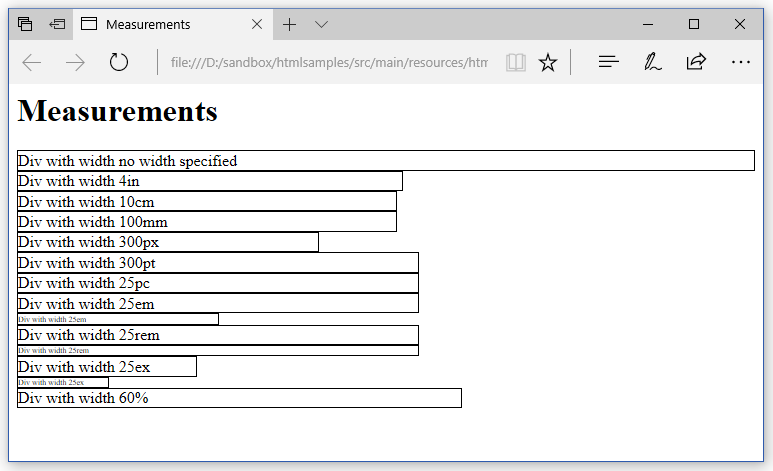 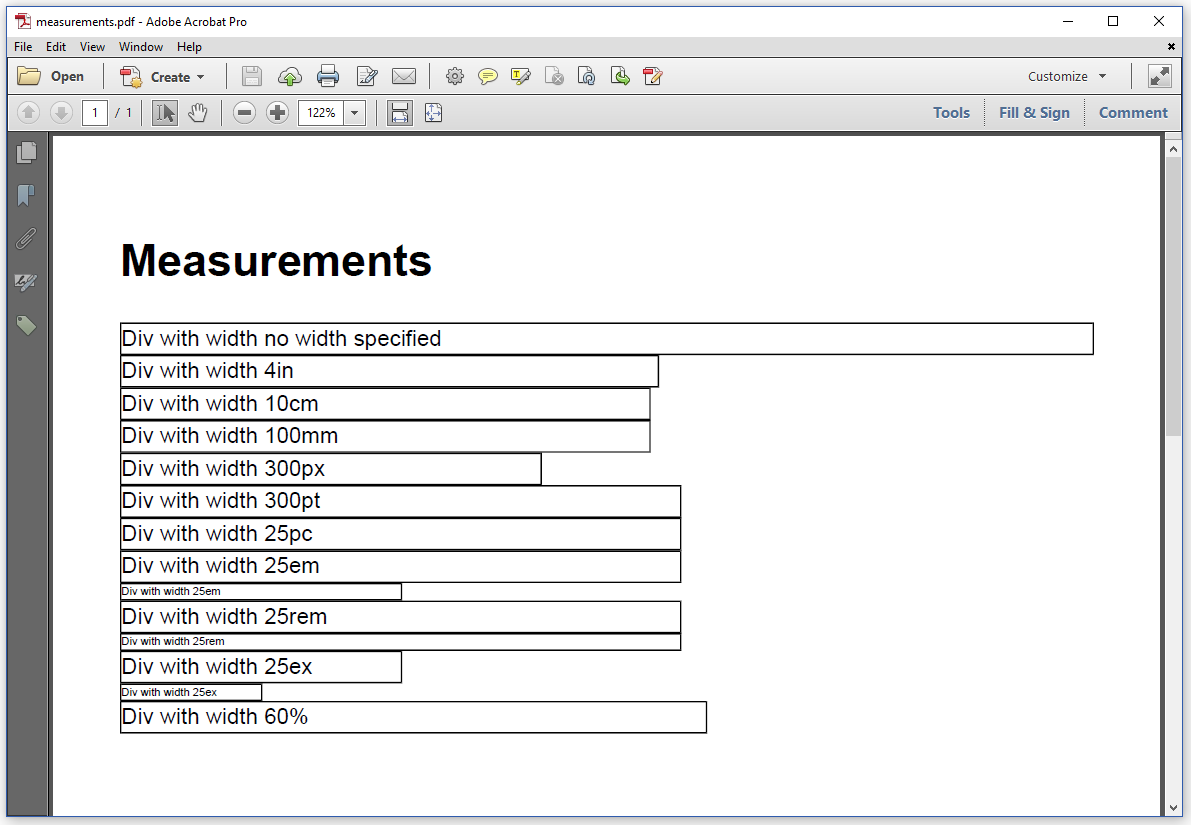 We see that the width of the  <div>