The purpose of the PDF digital signatures functionality is to ensure:

ISO-32000-2 also introduces a concept that was first published in PAdES-4:

Let's find out how this works, step by step.

Creating a digital signature for PDF

In figure 1, we can see how the bytes are organized in a PDF file. 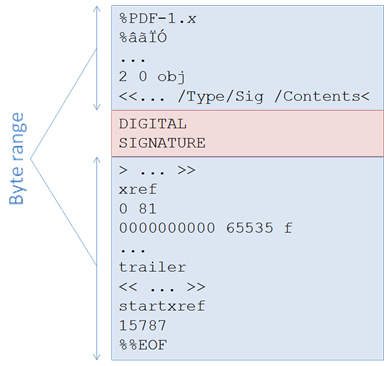 When we sign a PDF document, we take all the bytes of the file, except for the area where the digital signature will be stored. We create a message digest using a cryptographic hash function from these bytes. We sign this hash value using a private key, and we store that signed hash along with some extra information (the signer certificate, signature attributes,...) that is signed or unsigned, depending on the type of signature container.

A document can be signed more than once, by different signers. This needs to happen sequentially to avoid that every new signer invalidates the previous signers' signatures. This is shown in figure 2. 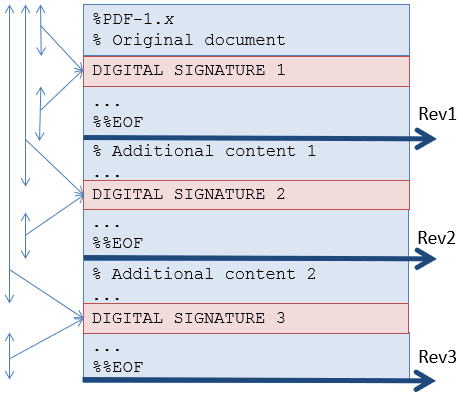 The minimum information that needs to be stored inside the signature consists of:

We'll need all of these elements to verify the signature.

Are our initial requirements met?

When you receive a digitally signed PDF, you can verify the integrity of the document using the following steps:

This is a way to check the integrity of the document.

The identity of the signer is stored in the signer's certificate. If the certificate is self-signed, there is no way to verify the authenticity, or to get any assurance of non-repudiation. To solve this problem, the signer needs to involve a certificate authority (CA) who will vouch for the information about the signer's identity. The signer's certificate will be on one end of the certificate chain; the root certificate of the CA will be on the other end. When verifying a signature, we'll check the revocation information provided by the CA and all the trusted parties in-between. The signer won't be able to deny that he signed the document unless he can prove that his private key was compromised, in which case he should have revoked it. This meets the requirements of authenticity and non-repudiation.

Best practices also imply that you involve a Timestamp Authority (TSA). A TSA service accepts your signed hash and signs it with its own private key adding a timestamp that can be trusted. This meets the requirement regarding the time of signing.

This timestamp is stored inside the digital signature, but PAdES-4 also introduced the concepts of a Document Security Store (DSS) and Document Timestamp (DTS) signatures. If a signed document is missing Validation Related Information (VRI), this information can be added to the PDF in a DSS. See figure 3 where we add missing certificates and missing revocation information. 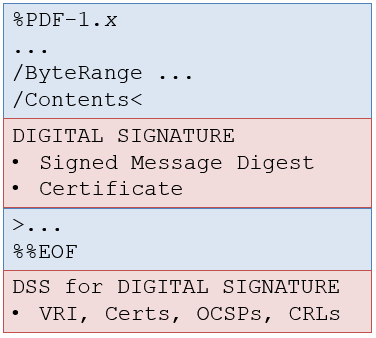 Digital signatures expire, either because certificates expire, or because the algorithms are proven to be flawed in which case the signature loses its trustworthiness.

For instance: SHA-1 once used to be considered as a safe cryptographic hash function, but it was deprecated by NIST in 2011 because it was considered broken in theory. In 2017, researchers from CWI and Google succeeded in breaking SHA-1 in practice. They succeeded in altering the content of a PDF file without breaking the signature proving the theoretical flaw in the SHA-1 algorithm.

With DTS signatures, we can extend the life of the digital signatures inside a document beyond their expiration. To achieve this, the most recent (valid!) VRI should be retrieved and added in a DSS, after which the document should be signed with a DTS. This signature should be created by TSA using the most recent hashing and encryption algorithms; see figure 4. 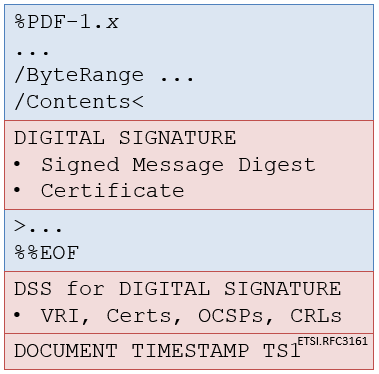 Obviously, the DTS also expires after a certain time, hence the operation needs to be repeated to further extend the life of the signatures in the document. This is shown in figure 5. 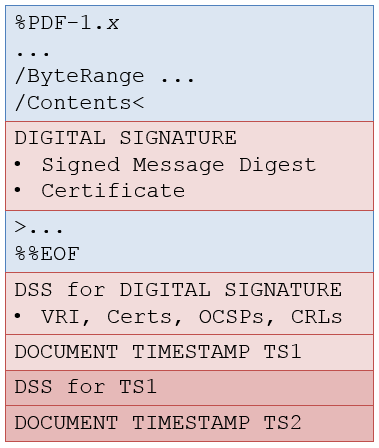 Figure 5: Extending the Life of a Digital Signature

This is a condensed description of how digital signatures work in PDF. This functionality works, and there's no reason why it won't continue to work in the future. Nevertheless, you might have detected some potential problems.

The adoption of digital signatures in PDF was slow, among others because one or more of the following reasons:

PDF documents that aren't signed often have the problem that you don't know if they can be trusted. Once the document is consumed offline, there is no green bar on top of the viewer that says: this document was served to you using the HTTPS protocol, and by the way: you can trust the domain from which this page is served.

If you have a URL to a PDF document, e.g. the address of the PDF reference, you can encounter the problem that the URL doesn't work anymore. You get a 404 error message, because the document was moved to another location. We call this link rot, and whoever needed to download the PDF reference might have experienced this problem first-hand because the PDF reference has changed address many times. There are centralized services such as doi.org that provide a Digital Object Identifier (DOI) that allows you to retrieve one or more currently active URLs to a resource. DOI allows you to register and maintain the location of a document for a fee. Wouldn't it be great if we could reduce that fee, and decentralize the service?

We can solve all of these problems, and probably even some problems we didn't even know we had, by introducing blockchain into the world of PDF documents.